There are two neighborhoods in the Guayaquil area of Ecuador in which RdC has houses: Arbolito and Monte Sinaí. These neighborhoods have their own unique features and are in different stages of community development. While the houses and neighborhoods are quite different, the desire to progress and work together in faith unites them. Arbolito is located in Durán and Mt. Sinai is in northern Guayaquil, about 45 minutes driving from Durán or about two hours by bus.

Ecuador has a large amount of internal migration. Thousands of people are continuously flocking to the cities, especially Guayaquil, which is Ecuador’s largest city, in search of access to resources, such as education, employment, transportation, healthcare, etc. This leads to “invasion communities” where large areas of government or privately owned land are taken over by groups of migrants who build homes on the land.  The process of legalizing the land is often complicated and tumultuous.  The areas, for example, are often plowed over and taken back by the owner, but may eventually be sold to the squatters and legalized when migrant populations return time after time.  Many residents of Durán, Monte Sinai and the outskirts of Guayaquil have moved from other provinces in Ecuador in this way.  They thus do not consider themselves from Durán, Monte Sinai or Guayaquil, but instead they still have connections to the Ecuadorian province where their family is originally from. 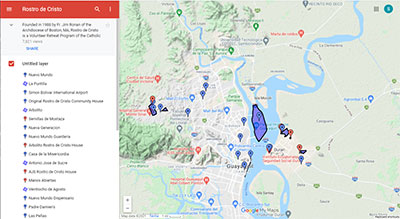 Explore an interactive map of our communities, programs, partners and project sites.

For an in-depth look at each location, go to
Recent Ministry Placements.